Welcome to the Build Patterns Wiki

This wiki is about Linden Lab's new Sandbox game called "Patterns"! It's a sandbox game like no other, as it uses realistic physics and fluid system, and is about creating, and making sure that creation won't collapse because you used the wrong material!

Currently Patterns is in early public alpha, and you can get a keyhere.

It's set in a world build from triangles set in awesome patterns you make!

Be sure to add more as the game gets more features, and feel free to edit to maximize the knowledge given! 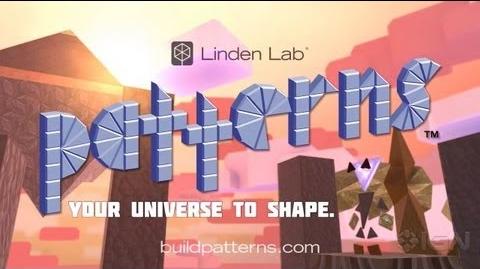 Contributors please note that currently attempting to add images while the game is running appears to break the wiki page editor. Ensure the game is closed before attempting image uploads.

The first update since first release has been announced! The update is slated for release Thursday the 18th of October.

An Update from the Patterns Team

Hello Patterns Customers, Our first update is right around the corner. We're going to be updating to a bigger world, adding more shapes to find in the world and - based on your feedback - we're adding the ability to place formations on your own creations as well as ours. We're also fixing plenty of bugs.

Our plan is to update on Thursday October 18 on Steam. We'll keep you posted on our progress.

V0.0.1 Genesis is now out for direct puchase from Linden Lab. All pre-order customers should shortly be recieving beta keys for steam!

On a final note, we will be updating furiously around release time and all contributions are welcome.

Community content is available under CC-BY-SA unless otherwise noted.
Advertisement